Lao society can be considered as a semi-independent rural village which lives on agriculture. Lao villages and their pattern life diversify among different ethnics, different geography and ecology. However, almost Laos villages are relative independence and quite isolated with little trade and communication to the others due to the lack of government infrastructure and effective transportation.

Lao Loum (make up 50% percents of population) dominates the Lowland Lao Society. Lao Loum traditionally lives in stable independent villages situated near lowland rivers or streams due to its fertile soil and favorable conditions for rice cultivation – their major economic activity. Villages are self-contained and range from around twenty to over 200 households, although they typically contain forty or fifty houses and 200 to 300 people. Usually, villages are separated by rice fields or unused land. These villages still keep nomadic lifestyle. As population grows and fertile land becomes scared, they often migrate to unsettled areas. The family structure is typically nuclear or stem: a married couple and their unmarried children, or an older married couple together with one married child and his or her spouse plus unmarried children and grandchildren. Because kinship is reckoned bilaterally and flexibly, Lao Loum may maintain close social relationships with kin who are only distantly related by blood. Each one equally contributes to the community benefit and equally shares the community’s responsibility. Most of them are Buddhist so they highly respect the power of spirit and deceased person.

Most people live in Midland of Laos are Lao Theung, making up about 24 percents of the population and consisting of at least thirty-seven different ethnic groups. Most Lao Theung villages are located on mountain slopes. They are somewhat smaller than Lao Loum village. Besides farming, Lao Theung also lives on hunting and gathering in the forest surrounding the village. Overall, Lao Theung groups are patrilineal. The ideal household consists of parents and children, wives of married sons, and grandchildren. Married sons eventually establish separate households, but a family might be temporarily augmented by a son- in-law who must live and work with the bride's parents for several years in partial payment of the bride-price. In these villages, there is a ritual leader who officiates at important spirit rituals that affect the entire village. Overall, Lao Theung are socially, economically, and politically the most marginal group of the three ethnic classes.

Lao Sung includes six ethnic groups of which Hmong, Akha, and Mien are the most numerous and lives on mountain tops, upland ridges, or hillsides over 1,000 meters. The Lao Sung are the most recent migrants to Laos, having arrived from the north in a series of migrations beginning in the early nineteenth century. Lao Sung lives on farming white rice, corn, several kinds of tubers and vegetables. Besides, they raise cattle such as chicken, pig and buffalo. Their household traditionally consist of large patrilineal extended families, with the parents, children, and wives and children of married sons all living under the same roof. Households of over twenty persons are not uncommon, although ten to twelve persons are more likely. Older sons, however, may establish separate households with their wives and children after achieving economic independence. Their cultural norms are more individualistic, and the household is more important than the village. 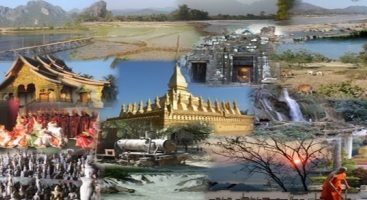 Located in Indochina, Laos shares border with China in the North, Vietnam in the East, Cambodia in the South, Thailand in the West and Myanmar in the North West. It is a quite small country with the...

Laos has quite long history of nearly 800 years. From 4th to 8th century, communities along the Mekong River began to form into townships, called Mueang. Laos history can be divided into 4 main...

Get our latest advice plus tips from our members. You'll also receive a free gift!